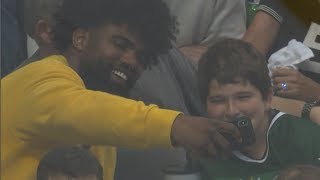 St. Louis native Ezekiel Elliott warmed tens of thousands of hearts Monday at a St. Louis Blues game against the Dallas Stars. Elliott, now a running back for the Dallas Cowboys, was at Game 3 of the second round of the Stanley Cup Playoffs when a young boy was hit with a puck. Elliott promptly went to the boy to cheer him up. Ezekiel Elliott the star running back out of Ohio State University and a St. Louis native made history in 2016. He was picked number four overall at t

Ezekiel Elliott among Cowboys in line to be paid

On the first day of the 2019 league year, six core members of the Dallas Cowboys were set to become eligible for some sort of free agency after the 2019 season: quarterback Dak Prescott, running back Ezekiel Elliott, receiver Amari Cooper, pass rusher DeMarcus Lawrence (who had been franchise-tagged), linebacker Jaylon Smith (who will be a restricted free agent) and cornerback Byron Jones. Then, earlier this month, the Cowboys agreed to a five-year, $105 million deal with Law

Now You Can Blog from Everywhere!

We’ve made it quick and convenient for you to manage your blog from anywhere. In this blog post we’ll share the ways you can post to your Wix Blog. Blogging from Your Wix Blog Dashboard On the dashboard, you have everything you need to manage your blog in one place. You can create new posts, set categories and more. To head to your Dashboard, open the Wix Editor and click on Blog > Posts. Blogging from Your Published Site Did you know that you can blog right from your publish

When it comes to design, the Wix blog has everything you need to create beautiful posts that will grab your reader's attention. Check out our essential design features. Choose from 8 stunning layouts Your Wix Blog comes with 8 beautiful layouts. From your blog's settings, choose the layout that’s right for you. For example, a tiled layout is popular for helping visitors discover more posts that interest them. Or, choose a classic single column layout that lets readers scroll

With Wix Blog, you’re not only sharing your voice with the world, you can also grow an active online community. That’s why the Wix blog comes with a built-in members area - so that readers can easily sign easily up to become members of your blog. What can members do? Members can follow each other, write and reply to comments and receive blog notifications. Each member gets their own personal profile page that they can customize. Tip: You can make any member of your blog a wr

At this time last year, there was no chance the Steelers were thinking about a new kicker. Chris Boswell was coming off of a Pro Bowl season filled with clutch and game-winning kicks. He was inked to a new five-year deal worth nearly $20 million during training camp. But a lot can change in one year, as Boswell suffered a nightmare in 2018. Statistically one of the worst kickers in the NFL, Boswell lost his clutch touch and was even having a hard time kicking extra points dur

The Oakland Raiders signed Ryan Grant to a one-year deal on Wednesday, and he could turn out to be a sneaky good addition in 2019. It’s no secret that I’m a Colts and Raiders fan – I always say the Colts are my wife, but the Raiders are my girlfriend – so when I heard the Raiders were signing Ryan Grant I knew they got a very underrated player. When the Colts signed Ryan Grant last year my first thought was “who?” But that “who?” quickly changed to “Woah!” While his 2018 stat