After watching nine quarterbacks go off the draft board ahead of him, Tanner Lee is eager to show he’s got more than just the physical tools to play in the NFL. Fortunately for him, the Jaguars are willing to give him a shot to show it after selecting him in the sixth-round during last week’s NFL Draft. Lee, 6-foot-4, 218 pounds, combined to throw for 6,744 yards and 46 touchdowns at Tulane and Nebraska, but his draft stock took a hit because of accuracy issues. He threw 16 i

One of the Seahawks’ top priorities heading into the 2018 season is improving a running game that has struggled to find consistency over the past two seasons, a task Seahawks coach Pete Carroll described as “hugely important” earlier this offseason. On Thursday, the Seahawks took a step towards achieving that goal, selecting San Diego State running back Rashaad Penny with the 27th overall pick of the 2018 draft. This marks the first time the Seahawks have used a first-round p

No assistant coach on Tennessee's staff has the head coach looking over his shoulder more than Terry Fair. The former All-American with the Vols and NFL first-round draft pick coaches Tennessee's cornerbacks, the position first-year head coach Jeremy Pruitt was most hands-on with during spring practices. Fair is one of the few coaches on Tennessee's staff who hadn't previously worked with Pruitt, though he had a connection to Pruitt through Will Friend from their stint at Col

A pop-up store featuring Dallas Cowboys running back Ezekiel Elliott showed up in Dallas on Sunday. The store popped up at Mockingbird Station and featured the fan favorite’s new brand logo. A line of fans could be seen waiting to approach the store and even get a picture with Zeke. The event was supposed to end at 5 p.m. but it stayed open a little longer as the running back tweeted he would stay to meet the fans who waited to see him. #EzekielElliott

The 2018 NFL Draft is nearly upon us! And if you follow the Los Angeles Rams closely, you probably know that they’re in “win now” mode. The feel of this offseason has been, from it’s very exciting onset, about fielding a roster ready to make a deep run in the playoffs — and potentially the Super Bowl. But they’ve still got work to do, primarily in the middle of their defense where they’ve lost several key starters - to include Robert Quinn, Alec Ogletree, and Connor Barwin -

When Rashaad Penny recently landed in Buffalo for a pre-draft visit with the Bills, the former San Diego State running back climbed off the plane without a coat or long sleeves, despite the bone-rattling chill. Penny is fearless when taking on tacklers — and winter itself. “I wanted to show my toughness,” he joked. The Southern California native’s wardrobe is hardly built for the NFL’s rugged northern climates, but his game fits perfectly. With any team. In any city. For anyo 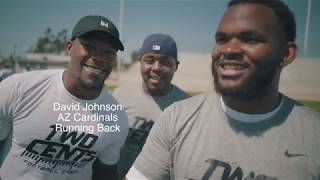 Brothers Elijhaa and Rashaad Penny returned to their former home at Excelsior Stadium last week and hosted their first youth football camp. Both played at Norwalk High. Elijhaa went onto Cerritos College, then Idaho and has been with the Arizona Cardinals since 2016. Rashaad rushed for 2,027 yards at San Diego State last year. The one-day camp focused on fitness and football technique sessions for participants, ages 5 to high school. In addition to the brothers, Arizona Cardi

New quarter, same result. The Dallas Cowboys’ Dak Prescott and Ezekiel Elliott once again find themselves near the top of the NFL’s merchandise sales list. In their rookie season, Prescott and Elliott finished first and second in NFL sales among all players. Following that impressive feat, the two Cowboys finished second and fourth respectively this season. The placement is actually a bit of a drop for the Cowboys QB, as he finished first over the last two quarters until bein

The other guys: Sleeper QB prospects flying under the radar

By now, you know the top four quarterback prospects heading into the 2018 NFL draft. It would be surprising to see any one of Sam Darnold, Josh Rosen, Josh Allen or Baker Mayfield available after the top 10 picks at this point. Maybe even the top five. Beyond them, the athletic intrigue around Lamar Jackson likely will earn him a first-round selection. Early in Day 2, Mason Rudolph shouldn't have to wait long to hear his name. But what about the rest? Who are the other top op
1
2